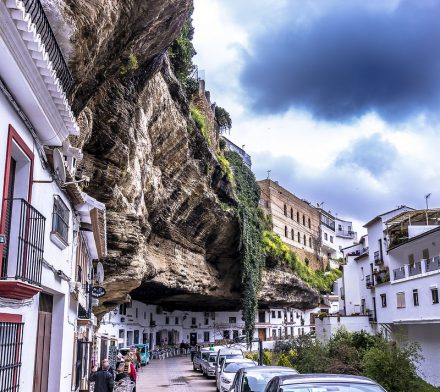 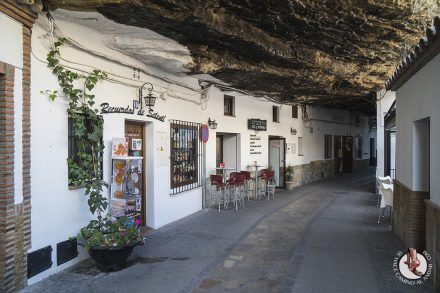 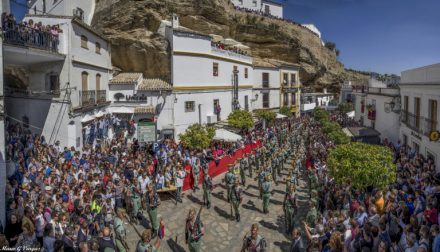 Setenil de las Bodegas is a Spanish municipality in the province of Cádiz, Andalusia. Its urban fabric is declared Historic Site, whose center is embedded in the pit formed by the Guadalporcún River as it passes through the city. It is part of the route of the white villages, and is connected to the railway line Bobadilla-Algeciras through the Setenil station. It is located at an altitude of 640 meters and is 157 kilometers from the provincial capital, Cádiz. In 2018 it had 2,732 inhabitants. The extension of its municipal term is 82 km² and has a density of 36.45 hab / km².dapibus leo.Monuments and places of interestView of the hamlet adapted to the orography of the surroundings.Monuments Historical-Artistic Set. The main attraction of this municipality is the same town, declared a Historic-Artistic Site in 1985, due to the beauty and originality of its urban fabric. Through a steep slope, the village descends from the castle, adapting itself to the course of the river, which gives it a unique layout with different height levels. In the lower part the neighbors have taken advantage of the pit created in the rock by the river to build their houses. It is an exceptional example of a type of housing called “shelter under rocks” that, unlike other semitrogloditic buildings developed in Andalusia, does not excavate the rock, but is limited to closing the rock wall and develops the housing longitudinally .Castillo de Setenil. Fortress Nazarí de Setenil (13th century) (Alcázar, Torre del Homenaje, Medina, Baños, Mezquita and Coracha-Mina) The fortress has its entire fence with 530 m .. of wall and its about 40 towers, it is also a of the few Nasrid fortresses that preserve all its medieval urban fabric.) Church of Our Lady of the Incarnation. Mudejar and Gothic styles. (Century XV-XVII Century). One of the biggest characteristics is that it really consists of two churches, one Mudejar and the other Gothic.Ermita de San Sebastián. Of the XV-XVI Century. Old Town Hall. Today is the Tourist Office, formerly Torre Albarrana access to the fortress (s.XIII_XV, House of Flour (s.XV-XVIII and Consistorial House (s.XVI-XIX). Ermita de Nuestra Señora del Carmen. 18th century.Stall of the SunErmita de San Benito, 15th-16th centuries Built on a mosque in the Moorish slum, near a fountain In 1502 he had several lawsuits with residents of the town who wanted to keep the farms that belonged to him in the repartimiento of the Catholic Monarchs Headquarters of the Brotherhood of Our Father Jesus Nazareno and Our Lady of Solitude who has always been in charge of his restorations.Ermita de Nuestra Senora de la Concepción.The eighteenth century.Caves of San Román. 16th century.Puente de la Calle Triana, XV-XVI century.Puentes de la Villa, XV-XVII century.Puente de la Calle Ronda, 18th century.Other places of interestCalles and historic districts of Nazarí Fortress Calle del Principe del Rey. (Current street entrance to the village) .Ca Llana (from the side of the church to the mine, is in the basement of the Cortilanes). Barrio del Torreón. (Housing surrounding the Torre del Homenaje, in what was the Plaza de Armas). Barrio del Mirador de la Peña. (Current Lizón, in Nasrid era was all the defense framework of the Alcázar, at its entrance to the town). Barrio de la Iglesia. (Housing located at the back of it, currently in the basement of the Cortinales.The church sits on the Alhama mosque). Barrio del Hospital. (Homes located at the back of the same, currently in the basement of the Cortinales, the hospital was the Royal Hospital of Our Lady of Santa Catalina, s.XV. The hospital was built taking advantage of the structure of the Arab baths. place is the only building built in the “Villa”. Barrio del Adarve.Barrio de la Torre del Espolón. (It is the southeast corner of the fortress, although it goes unnoticed, it still preserves two of its floors). Mina (In this neighborhood we find the Coracha-Mina of the Setenil fortress, a construction made for the water supply at all times, mainly in times of conflict.) The coracha was 40 meters long and 30 meters high. with three levels, the lower one has been the one that has elicited more legends since it is where the galleries and internal water pipes are located, as well as the well.The present construction has been the one that has forged the great ayory of the legends of the town) .Calles and neighborhoods of extrawalls Triana Street: (First news written in the fourteenth century). Street Round: (First news written in the fourteenth century). Vilches Street: (First news written in the fourteenth century) Street of San Benito: (First news written in the fourteenth century). High Street: (First news written in the fourteenth century). Bar del Cerrillo: (First news written in the century